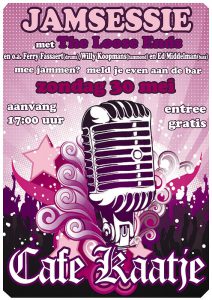 This gig was completely improvised.
Originally the members of MySon would just play in the jamsession.
However when they were there they were asked to open it up.

There was supposed to be a show at the Groene Engel on 2010-04-28, but this show was cancelled by MySon after Marius left the band. At that show Raymon and John met Adje, who became their next drummer, this being his first show.