We’ve got a new video up, it’s a music video for the song Stop & Think from Complex Chemistry.
Next to that we have also done an interview with Bob, from Rock and Roll and Meandering Nonsense.

Hello everybody again,
For those of you that haven’t revisited our main page yet: we’ve got a new video up on there (linked through from YouTube). It’s a music video for the song Stop & Think from Complex Chemistry.
We like to think it’s pretty cool, so we hope to you enjoy it too. Leave some comments about it, if you like.

Next to that we have also done an interview with Bob from the US-based e-zine Rock and Roll and Meandering Nonsense, who reviewed our first demo.
We thought it was a pretty good interview, so if you want some background on us, read about it here at Rock and Roll and Meandering Nonsense…: http://rnrnonsense.toomanyvoices.com/2009/02/interview-myson.html
So yeah, that’s all I have to report this far. 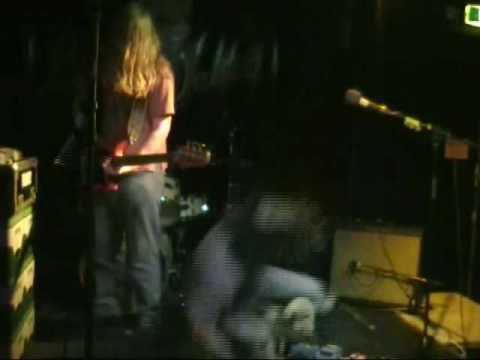 The Netherlands’ MySon takes sound quality and precision very seriously. They eschew it, concentrating instead on the raw art and energy that is at the heart of great rock n roll. They recently released a second demo that may have a more focused sound, but doesn’t compromise their principles of noise. Check out the new tunes on their Myspace page.

RnRnMN: One thing that struck me about your demo was that the crazy factor was pretty high. How do you seek out an audience for your brand of rock n roll?

RnRnMN: You seemed to bask in the rawness of that demo. Will you take the same approach on the new one or will you try to refine your sound?

We feel the rawness is definitely a part of our sound. However we do try to play our songs as we intended them to be. Listening back to the old demo and then listening to the new one, there is definitely a progress in that respect. Maybe it might come across as a bit less raw, I don’t know, but I think to most people it will still be raw as hell. We don’t do any studio tricks, don’t overnormalize our recordings (though we did run it through a tape recorder with pretty high record levels, this time), and just basically try to capture what is going on. Hell, the only real effect we have used on our vocals is a delay on the last note of ‘Call A Delay’, as we though it would be pretty funny there.

RnRnMN: It seems you’ve abandoned many of the traditional rock conventions, relying more on chaos than structure. With that unconventional approach, what direction do you see MySon taking as you grow as a band?

There is actually a surprising amount of structure when you really examine the songs. At least that’s what I feel. It’s basically still the Verse-Chorus-Verse-Chorus-Bridge-Chorus, that we use most of the time. But I guess we are pretty good at masking that. On the new demo there definitely are some new songs that are more structured, or more recognizably structured, I should say. But on the other hand there are also songs that are less structured than those that are on the first demo. We just try to do as many different things as we can come up with. We always try to do something we haven’t done before in our new songs. If we will be able to keep that up? Who knows? We’ll just do our best not to recycle too much of what we’ve done before. Trying to keep it fresh, and in that regard also open for a broader group of people, I guess.

RnRnMN: You’re wild enough in the studio. What goes in your live show?

Check out our YouTube videos, I’d say! We are actually surprisingly calm while recording, in regards to playing. Except for those little freak songs where you can just bash it out, and get rid of all the frustrations that have build up while recording all the other songs. But live pretty much anything goes, we just do what pops into our mind at the time. Playing live is almost like one big brainfart, just do what you like. We definitely are more noisy live, and we just try to put on a big explosion of energy, which we don’t really see enough of anymore in other most bands, nowadays. What we do hope, is to get the audience going as well (but which band wouldn’t?), but that has proved quite a task on some occasions. Though when it does happen, everything goes into overdrive and you really get a great buzz out of it, making it even more energetic. You just feed of each other, you know? However when we don’t have that luck, we definitely will just keep on trying, pouring out as much energy as we can. If just one person is able to receive it, that is enough. We do also hope to be a bit more jammy on stage, but that is rather difficult with a drumcomputer. Now that we do have a stand-in drummer, that is made a little easier. But still it could be a lot more if we just were to find our own, fixed, drummer.

RnRnMN: Do you think you take people by surprise or do most people know what to expect when they come to see you live?

I’ve never really seen anybody that knew what they could expect, except for the one fan we do have, haha. Most of the time people are pretty flabbergasted. Sometimes they are able to get over that and just go with the flow, and sometimes they just stay in that state. In the end we do try to play what we like, we don’t try to please the audience. We are playing for ourselves, if more people like it, that’s a great bonus. I don’t think any of the great bands, like Flipper, Black Flag, Sonic Youth, etc. played to please the audience in their original intention. It definitely makes for a much more timeless band when you don’t try to please the audience too much. After all, if you try to please the audience all of the time, you are most likely to just rehash everything that has been done hundreds of times before, and better. In the end we are our own audience, and there have to be some more people like us, right?

RnRnMN: Have you been able to stir up interest outside of the Netherlands?

Hell, we haven’t even been able to stir up all that much interest inside of the Netherlands. Maybe only a bit in ‘s-Hertogenbosch, but that has more to do with all the stickers we have put up everywhere around the city. Usually when we meet somebody in our city, and we show them our logo, they know it already. We usually also get the comment “So you are the band with all those damn stickers everywhere” which is pretty cool. Anyway, it almost looks like we have been able to get more interest going outside of the Netherlands then inside. But I guess that has to do with the culture here. Everything has to pay off, if you don’t get big bucks out of it, what’s the point? That’s pretty much the standard reaction we get when we tell people how focused we are on our band. We definitely want to play anywhere in the world, just try to get the music out to more people. Hopefully we will be able to tour as openers for some other bands, like Bromheads Jacket from England, and that will help us set a bigger foot outside of the Netherlands. However we will first start our conquest of the universe by ourselves, as you shouldn’t keep waiting for other people to do stuff for you. Not unless you don’t want anything to happen, that is. But of course every helping hand is very, very, welcome.

RnRnMN: If so, what has helped you spread the word? If not, what do you think stands in your way?

First speaking nationally we are a very active band in getting gigs. When we want to get some new gigs, we usually try to go to a couple of cities, and go to various venues there. We try to speak to the programmer and give them our demo, and also tell them what we are about. We get quite a mixed reaction out of that, some really dig it, while others think we’re shit for trying to meet them in person, but that’s their prerogative, of course. But usually we get at least one or two gigs per trip that way. It’s much more successful than sending out hundreds of e-mails. And it’s a lot more fun, seeing all those places and meeting all the people. Unfortunately internationally we won’t be able to do that everywhere. But we will definitely take a first step in that regard heading out to Belgium, Germany, etc., etc. Maybe there we can get the ball rolling. What definitely has helped us spread the word to the normal people (are there any?) is Myspace and YouTube. We wouldn’t have been able to get in touch with a whole lot of people if it weren’t for those two outlets.

RnRnMN: Pick your favorite band from each pair:

Damn, some of these are hard.