Well, we got a review for “Another Shitty Band’s First Demo”. This is our first review that we got for it, so it’s pretty cool.

Well, we got a review for “Another Shitty Band’s First Demo”. This is our first review that we got for it, so it’s pretty cool.
Anyway, originally published here, at the US-based e-zine Rock and Roll and Meandering Nonsense… : http://www.rnrnonsense.com/2008/04/review-myson-another-shitty-bands-first.html 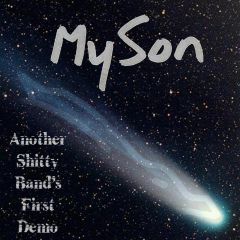 “Warning! The recordings contained on this disc are raw and far from perfect. Just how we like it!” That’s the warning on the CD, but it’s more like a mission statement and they back it up with the tunes. Another Shitty Band’s First Demo is raw beyond belief. Thick, sludgy guitar and bass are essentials in MySon’s no-groove approach augmented by wild, erratic drumming. The leads often don’t even sound repeatable which might be amateur, but it’s also constantly improvisational. At times they are able to even things out like on the spacey “Copenhagen Blues” and the art-punk-ish “The Middle of Everywhere,” but a pair of Nirvana covers, including Sub Pop 200 obscurity “Spank Thru,” make even Cobain’s earliest rumblings seem glossy.

On one hand, this is awful, but it also has the heart, the abandon and the freedom of great rock n roll. It worked for Flipper and, though to lesser extent, it works for MySon. This is art for art’s sake punk rock, more interested in dissonance than harmony. The music is plodding and chaotic, but it survives on mad energy. This probably has a very limited audience, but that small group of people can probably sing along with the chaos.

If you’re curious about my rating categories, read the description.